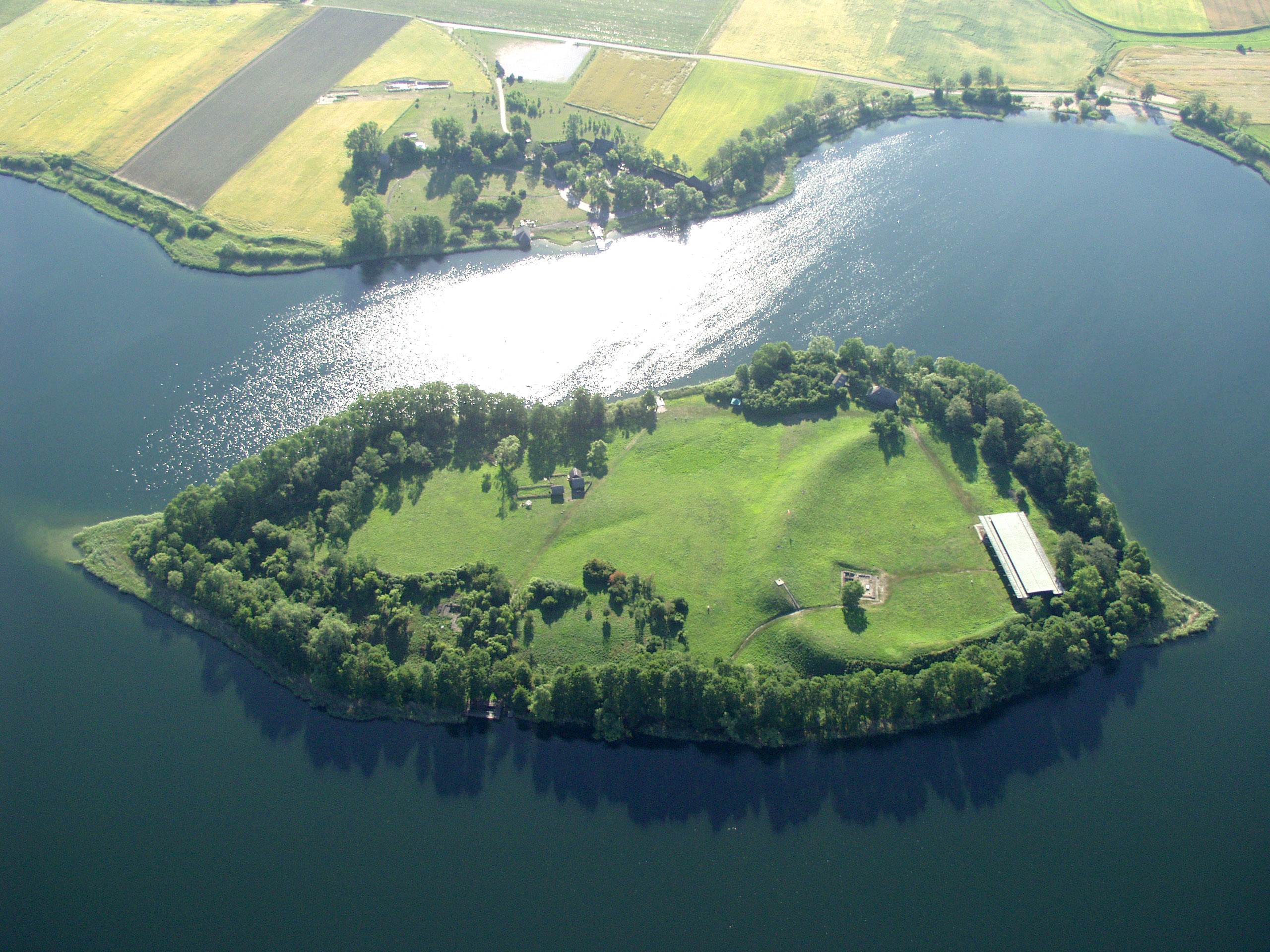 Ostrów Lednicki is an island in Lake Lednica, situated near a route from Poznań to Gniezno. The earliest surviving traces demonstrate that a settlement developed there about 11,000 years ago. In the Early Middle Ages on this island one of the most important strongholds of the first Piast state was built. It was constructed in the second half of the 10th c. at the place of earlier, smaller tribal stronghold. What has survived until the present is impressive: a few metres high remains of wood and earth defensive ramparts, fragments of coastal fortifications and the remains of wooden bridges, which were among the longest ones in the Middle Ages (438 m and 187 m).

However, the greatest attraction of this site is the remains of a palace residence, built in the second half of the 10th c. by Mieszko I. It was probably here that Bolesław the Brave received Emperor Otto III, who was making a pilgrimage to St Adalbert’s grave in Gniezno in 1000. In the east the palace is adjoined by a chapel, constructed on the plan of the Greek cross, with the remains of gypsum baptismal fonts (piscinae), which are the only finds of this kind from Poland. The discovery of these fonts allowed to propose a very probable hypothesis (which is now confirmed by many specialists from Poland and abroad) that the baptism of Mieszko I took place here. In the course of archaeological excavations and underwater examinations an enormous quantity of finds was discovered. They are displayed now in the permanent exhibition. The most precious discoveries include: a staurotheke (the reliquary of the True Cross) and other Medieval devotional items, numerous gold artefacts, bronze bowls imitating gold vessels, ornaments made from silver, jewellery from semi-precious stones and glass, a few boats, including the largest one which is an 11 metres long dugout canoe from 966, and numerous artefacts of daily use.

The result of underwater explorations is one of the largest assemblages of Early Medieval weaponry to be found in this part of Europe (more than 300 items). Forms of some artefacts suggest their Scandinavian origin.

The stronghold was protected by a garrison, whose members may have been Vikings. It was probably they who owned part of the weaponry hauled up from Lake Lednica. The owners of remaining swords, axes, spears, knives or a unique chainmail were most probably invaders and those who protected both the island and the stronghold. This is because most of the finds were discovered along the course of the bridges, which are not in the place any more today.

An additional attraction of this site, undisturbed by later buildings, is a ferry going to the island, the wildfowl, and Medieval flora, which has been recently reconstructed on the basis of archaeobotanical examinations. The heritage of Ostrów Lednicki is displayed in a permanent exhibition Ostrów Lednicki. Under the Sky of the Middle Ages. It demonstrates the most precious finds related to the historical origin of the Polish state in a modern manner. In 2011 the exhibition was awarded a Sybilla statuette, granted by the Minister of Culture and National Heritage, as the best archaeological exhibition in Poland. It also received an Izabella statuette for the best exhibition in Greater Poland (Wielkopolska Region).

This Branch of the Museum takes care of the Early Medieval stronghold in Ostrów Radzimski, not far from Murowana Goślina. It was located on an island of the Warta River which later became a part of the mainland.

By virtue of a directive of the President of the Republic of Poland Lech Wałęsa (Monitor Polski, No. 50, Year 1994, Item 421) Ostrów Lednicki was granted the title of the Monument of History. This status is granted to monuments of the highest historical, scientific and artistic value and of exceptional significance for the cultural heritage of Poland.

On 14 April 2016 Ostrów Lednicki hosted central celebrations of the Jubilee of the 1050th anniversary of the baptism of Poland.

We would like to ask you to announce visits of visually impaired persons in advance, so that we are able to prepare didactic assistance which facilitates your visit.

At the museum shop near the parking area it is possible to purchase attractive souvenirs and museum publication. In the neighbourhood there are restaurants which provide services for individual tourists and excursion groups. 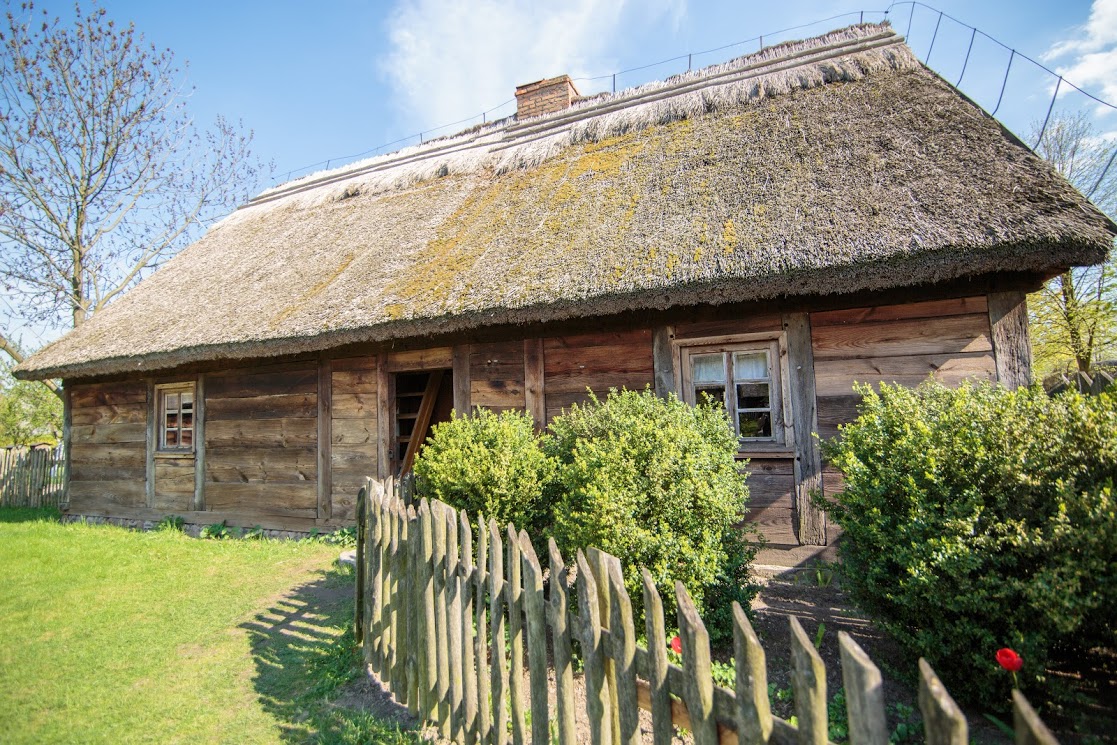 The Wielkopolska Ethnographic Park is situated at the edge of the village of Dziekanowice, near National Road 5 from Poznań to Gniezno. It is placed in the south-eastern coast of the picturesque Lake Lednica and is one of the largest open air museums in Poland. Its centre is a ring-shaped village of a circular type, composed of original peasant homesteads, mainly of a 19th c. date, which were brought here from various parts of Greater Poland. They have been provided with original furniture and equipment, and great attention was paid to historical accuracy. This part of the exhibition is completed with a wooden church dating from the early 18th c., an 18th c. shed tavern and a court and manor buildings, including an 18th c. Baroque court with corner extensions, annexes and a French style park. A natural background for the entire exhibition is the picturesque countryside landscape with fields, meadows where animals graze, roads flanked by willows, gardens and orchards with old species of trees and a hill with various types of windmills.

This Branch of the Museum takes care of fully equipped “Dutch” windmill which was built in 1905 in Rogierówko by the Lake Kierskie, to the north-west of Poznań.

In the 18th c. museum homestead there is the “Lubczynek Tavern,” servicing individual tourists and excursion groups. It offers specialities of Greater Poland’s cuisine. The same building houses a museum shop with souvenirs and publications. 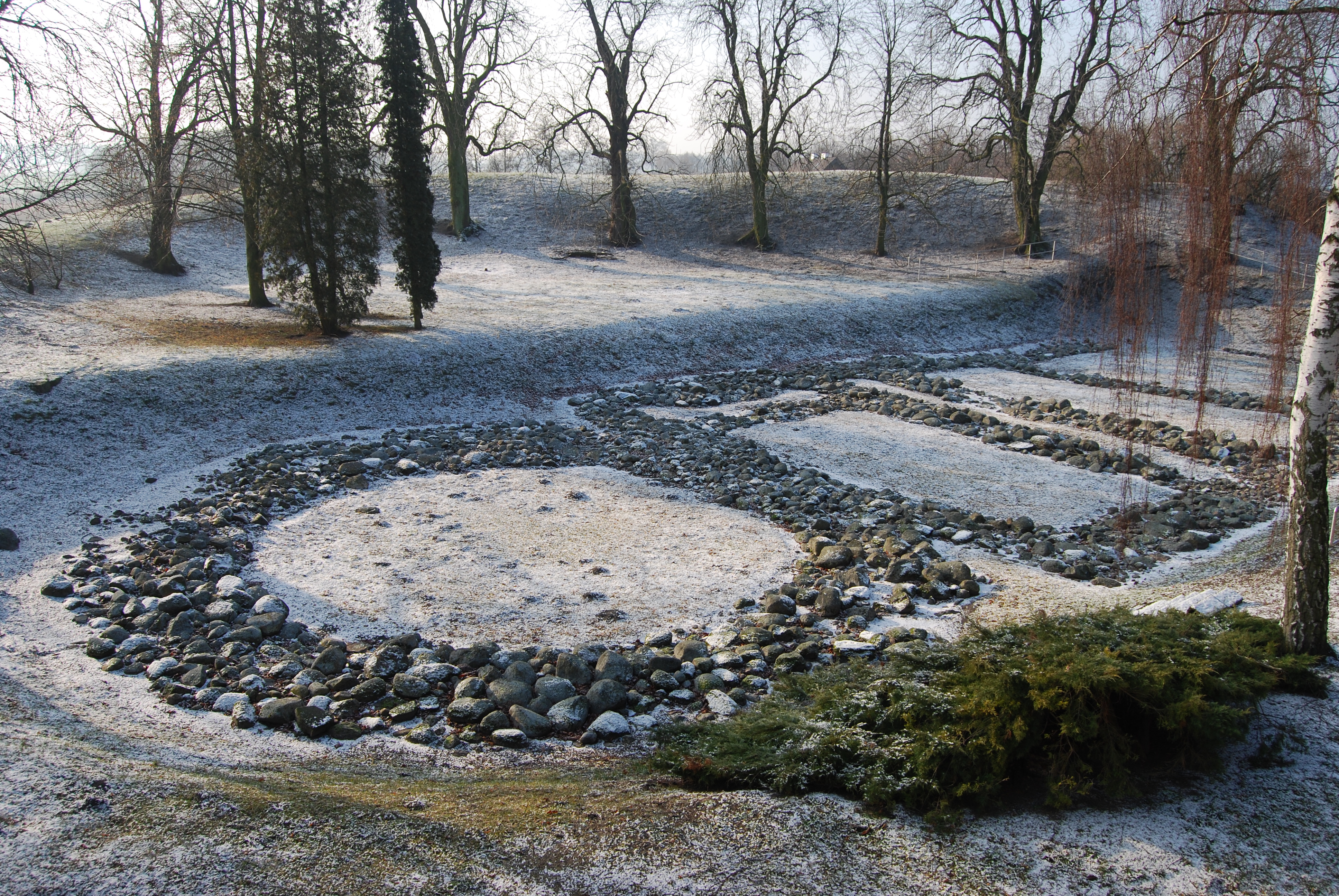 Giecz, one of the main strongholds of the Piast monarchy, alongside Poznań, Gniezno, Ostrów Lednicki and Łekno, was constructed in the second half of the 9th c. to the south of the mentioned fortresses. The enlargement of the centre took place in the second half of the 10th c. The invasion of the Czech Duke Břetislav and resettling of inhabitants of the stronghold to Bohemia in 1039 impeded the development of Giecz. However, the destroyed stronghold was rebuilt and restored to its previous splendour. Until the turn of the 13th and 14th c. Giecz was a seat of the castellany. Then, it lost its importance in favour of towns which were coming into existence in the neighbourhood and it fell into oblivion. On the basis of examinations held after World War II it is known that the stronghold in Giecz had a great strategic significance and played an important role in trade exchange. Medieval ramparts of the stronghold, which are up to 7 metres high, survived in a very good shape. Inside the stronghold, near the main entrance, it is possible to see the stone foundations of a palatium with an attached rotunda-shaped chapel. The remains of one of the earliest churches in Poland have been recently discovered in the northern part of the stronghold. The church had a double-tower westwork, which is typical for the form of German churches originating in the sphere of the Carolingian architecture.

In a museum exhibition building inside the stronghold it is possible to visit a permanent exhibition “Terra sancta – Giecz in the Piast Monarchy.” It displays finds from archaeological excavations in the area of the stronghold and its vicinity. Some of these, e.g., a sword or a conical helmet, are unique in their nature. Other ones, such as ornaments from bone, antler, silver, gold or semi-precious stones, confirm the rank and exceptional nature of the stronghold centre in Giecz.

In front of the stronghold there is a reconstruction of a Medieval settlement, surrounded with a palisade. It comprises a farmer’s homestead, a herbalist’s hut or a fisherman’s stilt house. Educational activities for children and school youth, as well as open air events related to the Slavic ceremonial year, are held in the area of the settlement. Another exhibition building for temporary exhibitions was also built here.

In the museum there is a sales point with souvenirs and museum publications. 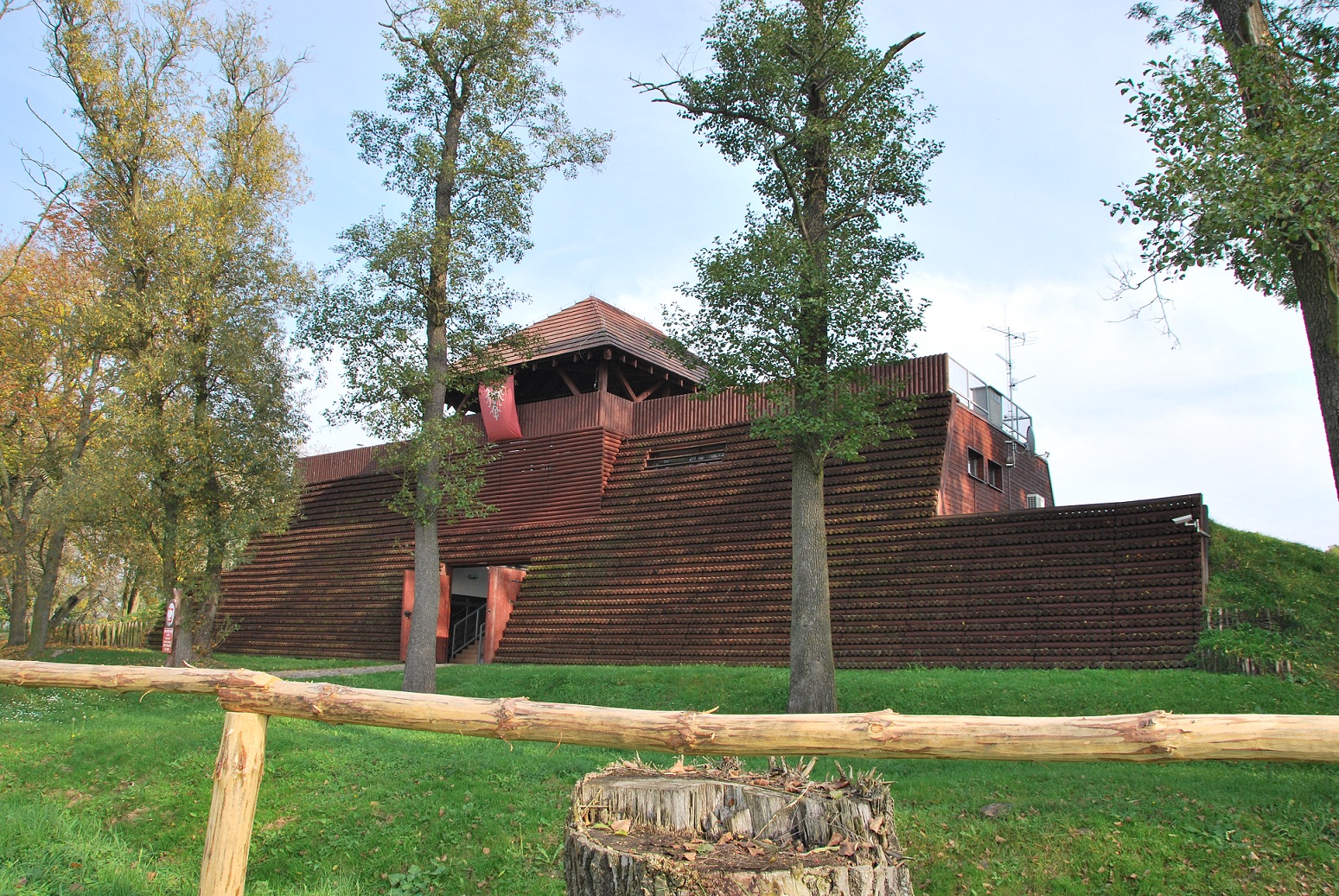 Grzybowo is one of the largest strongholds which came into existence in the period of the formation of the Piast state. It was constructed 6 km to the north-east of Września. The stronghold, well-visible in the field, takes up an area of 4.7 ha. Its shape is close to a rectangle with rounded corners. The stronghold is surrounded by a rampart, whose remains are up to 9 metres high. From the east there is a depression in the rampart, which suggests that the main entrance to the stronghold was once located here. The other entrance is outlined on the northern side, where two arms of the rampart converge, slightly overlapping each other. The beginnings of the stronghold in Giecz can be dated to the 920s and 930s. It seems that a small stronghold in the north-western part of the present premise came into existence first. This stronghold had a fairly regular shape, with an outline close to a circle. Its internal diameter was 40 m and the core of its rampart was about 17 m wide. A conversion of the stronghold started in the mid-10th c. It consisted in a levelling of part of the terrain outside the original stronghold and using a much larger area than before. It was then that the ramparts whose remains we can see today were constructed. The last stages of the conversion of the stronghold took place in the early 11th c., and the end of the permanent inhabitation of the stronghold can be dated to a period no later than the mid-11th c. On the other hand, some settlement in the stronghold still existed in the 12th c.

The most valuable finds displayed in the permanent exhibition include weaponry (mail hauberks, javelins, arrowheads), and artefacts of daily use, such as knives, needles or awls. There are also finds which were considered luxurious in the Middle Ages: antler combs, bone fittings, and fragments of jewellery from glass, amber, carnelian or rock crystal. The exhibition’s greatest treasure is a hoard of coins and silver ornaments.

Inside the museum building, which was constructed in 2010, a unique exhibition “The Stronghold in Grzybowo – between the Tribe and the State” was organised. It imitates an archaeological trench and explains interpretation methods which allow for a reconstruction of the discovered remains of the stronghold.

Every third weekend of August the stronghold welcomes the participants of the annual historical reenactment event called the Warrior Tournament of Grzybowo.

In the Museum there is a sales point with souvenirs and museum publications.